Currently our line runs for around three miles between Page's Park and Stonehenge Works. Beyond here, the line continued to Double Arches, where the sand processing plant is still fed by nearby quarries, but all transport is now by road. Some of the track still remains, and is used as storage sidings. Restoration of the remainder, and the extension of passenger services to Double Arches, is the subject of our latest appeal.

At the far end of the two-platform Page's Park station is the shed, which is the operating base of the locomotives and coaches that run the passenger service. A footpath leads from Platform 2 to the front of the shed, to allow viewing from close quarters. The Engine Shed Show is a series of regular free guided tours of the shed, where you can meet the engines, and learn about the railway's fascinating history from a new exhibition area.

The award-winning new station building is in use, and is now the location of the booking office and souvenir shop.

Platform 1 stands alongside the large public park which predates the railway, and gives the station its name, with an excellent children's play area, plus sporting, exercise and picnic facilities. A community garden, with access path from the station, is a welcome addition alongside Platform 1. A project run by local volunteers, it is well worth a visit. Look out also for the Sands of Time trail plaque on the platform fence, commemorating the railway's origins in the sand quarrying industry. And don't forget the Buzzrail Café, for your refreshments before or after your journey.

Leaving Page's Park station, the line climbs sharply between the park and a former sand quarry, now redeveloped as a housing estate. Don't forget to wave to the croquet players in the park, if you see them! The line then takes on the suburban character of the first part of the journey, running rather incongruously through a green corridor, past modern housing and industry. Back in 1919, of course, this was all fields.

At the top of the climb away from Page's Park, the row of houses backing on to the railway was once the married quarters for RAF Stanbridge, which stood on the opposite side of the line. Known originally as Q Central, this top-secret signals base was opened shortly before the Second World War, and was responsible for the development and deployment of RADAR, including vital support for the D-Day landings. It also handled the communications traffic for the codebreakers at nearby Bletchley Park, and much else besides.
Most of the base closed in the 1990s, and has been developed as housing. A few modern buldings were in use until 2013, when the base finally closed, So the row of ordinary-looking houses is the only surviving link to the area's top-secret past. We have named one of our locomotives, built during the Second World War, RAF Stanbridge, in honour of our illustrious neighbours.

The train stops at Stanbridge Road level crossing, to let off the flagmen to stop the traffic. Soon afterwards, it descends the 1:25 (4%) gradient of Marley's Bank, named after the tileworks which once stood alongside the line, and was supplied with sand by its trains. This is one of the steepest gradients used by passenger trains in Britain, and your engine will work hard on its return journey. Leedon Loop is where trains cross on busy days. Crews radio to Control for permission to go forward on to the next stretch of single track, and ensure that nothing else is coming in the opposite direction. 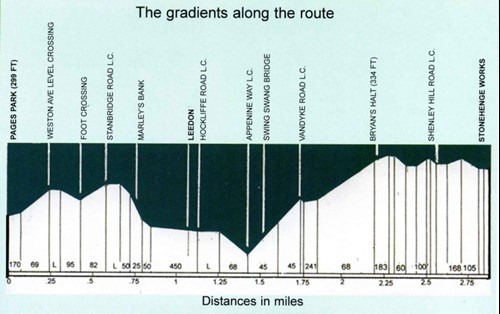 Immediately beyond is Hockliffe Road level crossing (A4012), which is again protected by flagmen. After Swing-Swang Bridge, which crosses Clipstone Brook, the line begins a long climb to Vandyke Road level crossing, and the scenery starts to open out to a more rural aspect.

From here, you will start to get glimpses of our newest neighbour, claimed to be Britain's biggest onshore wind turbine when new. Standing 450ft (136m) tall, it generates enough power to supply 1300 homes.

After Vandyke Road crossing, the line takes a sharp curve through a right-angle, to run parallel with the road. The land enclosed by the curve has undergone an award-winning transformation, from a bramble wilderness into a spectacular wildflower meadow in high summer. Here you leave the last of the houses, and as a result of the wildflower meadow project, you can now see the track of the last surviving sand quarry branch disappearing behind the gardens. Look out for the sand train now permanently installed there.

The current working face of Chamberlain's Barn quarry can be seen in the distance, as the line climbs to its highest point alongside Shenley Hill. This marks the western limit of the Greensand Ridge, a range of low hills which runs across country to the outskirts of Cambridge. Here you can get a good view of the wind turbine, situated in Double Arches sand quarry, but visible for miles around.

On the opposite side of the train, you can see from here across rolling countryside to the Chiltern Hills Area of Outstanding Natural Beauty, and the neighbouring counties of Buckinghamshire and Hertfordshire. On clear days the Whipsnade Lion, carved into the chalk hills of Dunstable Downs, near the famous zoo, can be seen in the distance.

Stonehenge Works station is named after the brickworks that used to stand alongside the railway, which supplied it with sand. The big chimney was demolished  in June 1985, by celebrity steeplejack Fred Dibnah, and the works was replaced by the modern tile factory. But still standing is the former stables block, where horses were once kept for work in the quarries. An outstanding piece of Bedfordshire rural architecture, built in 1918, supposedly by prisoners of war, it now houses the Leighton Buzzard Railway's main workshops. Look out for the faces carved into the stone – were these the PoWs' self-portraits?

Stonehenge Works is also the base of the locomotives and rolling stock not involved in the passenger service, and some items are on public display in the works yard. A special viewing area lets you see the footplate crew topping up the passenger train locomotive with coal and water, before running round for the return journey. At regular intervals during the season, the Industry Trains Display is operated in Stonehenge Works yard, demonstrating how narrow-gauge railways once transported goods and materials for many different industries.

On other days, one of the Ruston-Bucyrus 10RB excavators, rescued from nearby quarries, roars into life, and shows how it used to earn its living, filling railway wagons with sand. A popular feature is a miniature railway track, which has offers free rides to fare-paying passengers on certain dates.

There is also a small exhibition building, telling the story of the Motor Rail & Tram Car Company, which started production of its Simplex petrol locomotives for the War Department in 1916, and became the major supplier to the Leighton Buzzard sand quarrying industry. Nearby, an ex-RAF passenger coach contains a display on the role of narrow-gauge railways in supplying the battlefield trenches.

Preserved steam loco "Penlee", which has not steamed since the 1940s, is one of the most photographed items on the railway, as children can climb safely into the driver's cab. They can also explore the unusual features of 'Nutty', which arrived in 2012 for static preservation. Our latest acquisition, a Brigadelok steam engine build for the German side of the Great War trenches, is also on display.

A craft shop, with light refreshment facilities, is an increasingly popular attraction, with a wonderfully varied display of hand-made items for sale.

For those who want to spend more time discovering the delights of the Greensand Ridge, a public footpath is signposted on the opposite side of the road. Please remember to make a note of the return train times!